The U.S. human spaceflight program appears to be on an unsustainable trajectory. It is perpetuating the perilous practice of pursuing goals that do not match allocated resources.

The Committee noted that the projected flight rate is nearly twice that of the actual flight rate since return to flight after the Columbia accident. Recognizing that undue schedule and budget pressure can subtly impose a negative influence on safety, the Committee finds that a more realistic schedule is prudent. With the remaining flights likely to stretch into the second quarter of 2011, the Committee considers it important to budget for Shuttle operations through that time.

Once the Shuttle is retired, there will be a gap in America’s capability to launch humans into space. […] The Committee estimates that, under the current plan, this gap will be at least seven years long. There has not been this long a gap in U.S. human launch capability since the U.S. human space program began.

The Committee is concerned that the ISS, and particularly its utilization, may be vulnerable after Shuttle retirement. The Committee finds that the return on investment of ISS to both the United States and the international partners would be significantly enhanced by an extension of ISS life to 2020.

Given the funding originally expected, the Constellation Program was a reasonable architecture for human exploration. […] as a result of technical and budgetary issues, the development schedules of Ares I and Orion have slipped, and work on Ares V and Altair has been delayed. Most major vehicle-development programs face technical challenges as a normal part of the process, and Constellation is no exception. While significant, these are engineering problems, and the Committee expects that they can be solved. But these solutions may add to the program’s cost and/or delay its schedule.

However, the Committee is concerned about Orion’s recurring costs. The capsule is considerably larger and more massive than previous capsules (e.g., the Apollo capsule), and there is some indication that a smaller and lighter four-person Orion could reduce operational costs. However, a redesign of this magnitude would likely result in over a year of additional development time and a significant increase in cost, so such a redesign should be considered carefully before being implemented.

No one knows the mass or dimensions of the largest piece that will be required for future exploration missions, but it will likely be significantly larger than 25 metric tons (mt) in launch mass to low-Earth orbit, the capability of current launchers.

In a different, related architecture, the Orion and Altair are launched on two separate “Lite” versions of the Ares V, providing for more robust mass margins. Building a single NASA vehicle could reduce carrying and operations costs, and accelerate heavy-lift development. Of these two Ares system alternatives, the Committee finds the Ares V Lite in the dual mode the preferred reference option.

The more directly Shuttle-derived family consists of in-line and side-mount vehicles substantially derived from the Shuttle, providing more continuity in workforce. The development cost of the more Shuttle-derived system would be lower, but it would be less capable than the Ares V family and have higher recurring costs. The lower launch capability could eventually be offset by developing on-orbit refueling.

However, the Committee found that, because of technical and budget issues, the Ares I schedule no longer supports the ISS.[…] Ares I was designed to a high standard in order to provide astronauts with access to low-Earth orbit at lower risk and a considerably higher level of reliability than is available today. To achieve this, it uses a high-reliability rocket and a crew capsule with a launch-escape system. But other potential combinations of high-reliability rockets and capsules with escape systems could also provide that reliability.

The United States needs a way to launch astronauts to low-Earth orbit, but it does not necessarily have to be provided by the government. As we move from the complex, reusable Shuttle back to a simpler, smaller capsule, it is an appropriate time to consider turning this transport service over to the commercial sector.

The Committee suggests establishing a new competition for this service, in which both large and small companies could participate.

A human landing followed by an extended human presence on Mars stands prominently above all other opportunities for exploration. Mars is unquestionably the most scientifically interesting destination in the inner solar system, with a history much like Earth’s.

The Committee finds that both Moon First and Flexible Path are viable exploration strategies. It also finds that they are not necessarily mutually exclusive; before traveling to Mars, we might be well served to both extend our presence in free space and gain experience working on the lunar surface.

Option 1. Program of Record as assessed by the Committee, constrained to the FY 2010 budget. This option is the Program of Record, with only two changes the Committee deems necessary: providing funds for the Shuttle into FY 2011 and including sufficient funds to de-orbit the ISS in 2016. When constrained to this budget profile, Ares I and Orion are not available until after the ISS has been de-orbited. The heavy-lift vehicle, Ares V, is not available until the late 2020s, and worse, there are insufficient funds to develop the lunar lander and lunar surface systems until well into the 2030s, if ever.

Option 2. ISS and Lunar Exploration, constrained to FY 2010 budget. This option extends the ISS to 2020, and it begins a program of lunar exploration using Ares V (Lite). The option assumes Shuttle fly-out in FY 2011, and it includes a technology development program, a program to develop commercial crew services to low-Earth orbit, and funds for enhanced utilization of ISS. This option does not deliver heavy-lift capability until the late 2020s and does not have funds to develop the systems needed to land on or explore the Moon.

Option 3. Baseline Case —Implementable Program of Record. This is an executable version of the program of record. It consists of the content and sequence of that program – de-orbiting the ISS in 2016, developing Orion, Ares I and Ares V, and beginning exploration of the Moon. The Committee made only two additions it felt essential: budgeting for the fly-out of the Shuttle in 2011 and including additional funds for ISS de-orbit. The Committee’s assessment is that, under this funding profile, the option delivers Ares1/Orion in FY 2017, with human lunar return in the mid- 2020s.

Option 4. Moon First. This option preserves the Moon as the first destination for human exploration beyond low-Earth orbit. It also extends the ISS to 2020, funds technology advancement, and uses commercial vehicles to carry crew to low-Earth orbit. There are two significantly different variants to this option.

Both variants of Option 4 permit human lunar return by the mid-2020s.

Option 5. Flexible Path. This option follows the Flexible Path as an exploration strategy. It operates the Shuttle into FY 2011, extends the ISS until 2020, funds technology development and develops commercial crew services to low-Earth orbit. There are three variants within this option; they differ only in the heavy-lift vehicle.

All variants of Option 5 begin exploration along the flexible path in the early 2020s, with lunar fly-bys, visits to Lagrange points and near-Earth objects and Mars fly-bys occurring at a rate of about one major event per year, and possible rendezvous with Mars’s moons or human lunar return by the mid to late 2020s.

The Committee further finds that it is possible to conduct a viable exploration program with a budget rising to about $3 billion annually above the FY 2010 budget profile. At this budget level, both the Moon First strategy and the Flexible Path strategies begin human exploration on a reasonable, though hardly aggressive, timetable. The Committee believes an exploration program that will be a source of pride for the nation requires resources at such a level. 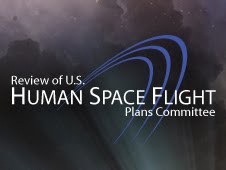